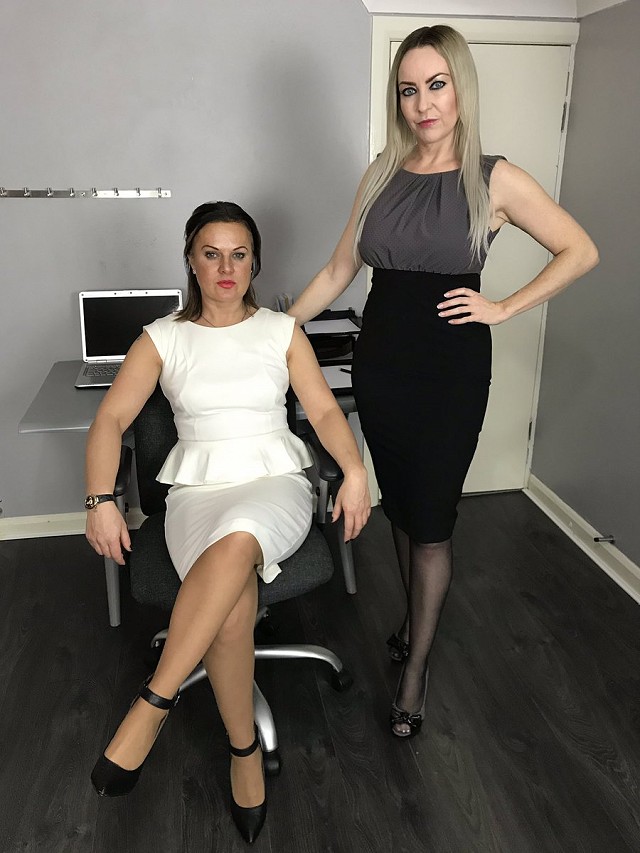 Three models were lined up to do videos in rotation with each other so they all got a bit of a break inbetween, Mistress Athena and I however didn't get a break at all as we were in every one. We worked extremely hard and we shot a total of 10 videos in around 5 hours! We had to start later in the day than normal as I already had a session booked in so it meant less videos and a break or keep working all the way through. Mistress Athena chose the later option so I was on super organised mode with all rooms arranged or knew how they wanted to be for each scene, along with having various outfits on standby. We were teachers, army officers, in the office (see photo on the right), in a mistress session, kidnap scenario, private investigators, prison officers and domestic boyfriend/girlfriend & Auntie scenario.

My favourite video of the day

We shot so many brilliant spanking and caning videos videos it's hard to pick my favourite. I think the prison judicial caning was the one I enjoyed the most as being able to do hard cane strokes that mark a bottom is lots of fun.  Another really good one was where we discovered a pupil had faked his entrance forms as Miss Wood saw his real driving licence ID showing he's 30! He has a school uniform and teacher fetish. So Headmistress Powers and Miss Wood set about punishing the naughty liar with a hand spanking and gym plimsoll.

Mistress Athena certainly knows how to tell off and punish naughty boys. I was very impressed with her style. I especially liked her Northern accent! We got on really well so I will be offering double domme sessions with Mistress Athena and will discuss some dates, but she is willing to travel down for a minimum 2 hrs session. Contact me via my mistress sessions form if you're interested.

Join my mailing list for all my latest news on my session dates, touring dates, items for sale, upcoming videos, and more...

Clicking OK below will redirect you to my members site, which is hosted and operated independently of my main site by a third party. Should you not wish to be redirected, please click cancel.

Clicking OK below will redirect you to a page on my members site. My members site is hosted and operated independently of my main site by a third party. Should you not wish to be redirected, please click cancel.

All content featured on this site unless specifically stated otherwise is Copyright © 2002 - 2022 Miss Jessica Wood - All rights reserved.

All models are over 18 years of age, and have signed a release consenting to be featured. Records are kept in accordance with international law.

I solely use cookies for analytics purposes in order to give you the best experience on my website. Cookies are also required and used by CCBill© to track site referrals for members of my affiliates scheme. If you do not have cookies turned off in your browser I assume that you are happy to receive cookies from me.

If you would like to change your browser preferences regarding cookies, you may do so by following the instructions here